Give them the freedom of speech, they will make better India 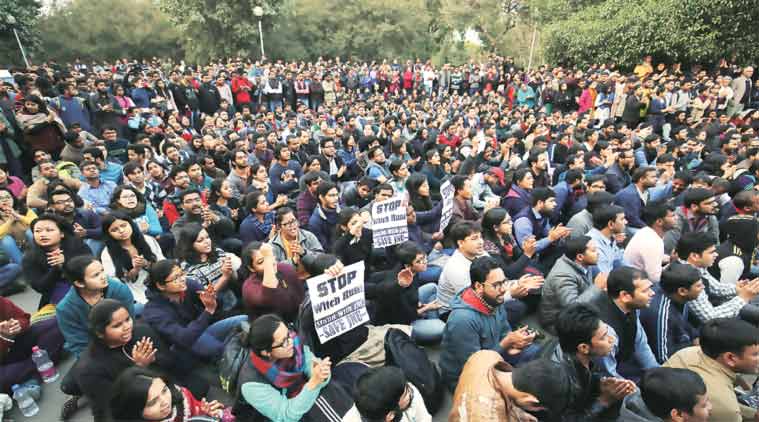 India is in the era of "Make in India " campaign, targeted to transform India into a global leader. We have the skill, talent, and determination to become a developed nation from a developing one. The main challenges we are facing in this context is the lack of innovation efforts since innovation is the prime driver for economic growth and development of a country. Unfortunately the Global Innovation Index shows that India is coming down heavily in its invention and innovation efforts. Over the last three years, India is witnessing a fall in its overall GII ranking, which dropped from 62nd place in 2012 to 81th in 2015. The main concerns behind this is the changing dynamics of the country's political, educational and business environment. Especially in innovation and invention efforts.

Unfortunately, the news from our different research institute shows that the atmosphere in the research institutes are worsening day by day because of castism, extremism, and anti-nationalism by the so called patriots or nationalists. Our researchers are forced to fight inorder to protect the right to equality, freedom of speech, freedom of religion and right against exploitation. Even though the constitution makers gave a long mention about equality (Art14-18) in our constitution, a country like India with lots of inequalities is still struggling for eradicating the inequalities and castism after 66 years of its constitution formation. Our researchers are adding new literature form to the society as suicide note. They are unable to make any changes in the society because of the castism and the breech of even Fundamental Rights by the state. The recent development with JNU is more overwhelming than other universities. Government is even slapping sedition charges over constitution and civil right protecting students. It’s shameful that the Government is applying the sedition charges against students who talk on behalf of the poor people of the country. State is forgetting the truth that these sedition laws were introduced by Britishers not to protect India’s right or Indian's right, but to perpetuate British rule in India and their control over Indian citizen.None of the modern societies use this law anymore. United States never used the sedition law after 1960. It quite sad that the government used this law against JNU union president Sri Kanhaiya Kumar without any proof what so ever of such wrongdoing on his part. In the 1962 Kedar Nath Singh vs State Of Bihar case and the 1978 Menakagandhi case Supreme Court had made clear that "A person can be charged sedition only if there is incitement to violation in his speech or writing or a tendency to create disorder or disturbance in law and order. A speech or deed alone could not be a reason for sending a person to jail".   Freedom of speech is the mother of all liberties. It’s the essence of free society and it must be safeguarded at all time. Liberty to express opinions and ideas without hindrance or fear of punishment is significant for a country to become developed and civilized. Most of the countries and people in the world cries for the freedom of Speech and Expression. Unfortunately in India is the opposite which is going on. Various section are saying that we have too much freedom of speech and expression and it should be curtailed. i.e. crying for controlling the freedom of speech and expression. Nowadays the efforts for protecting constitution and freedom of speech is always misinterpreted as an antinational movement or non-patriotic movement by the communal forces .They are treating nationalism, security and patriotism as a kind of religion and using it for creating a culture of bans. True Indian patriot is one who thinks and acts in favor of all Indians. It would be foolish to enjoy the luxury of patriotism. Patriotism is a noble sentiments, which created freedom fighters in many lands, but the sentiments tends to be static , out dated and reactionary in the present day context. There is a tendency to belittle the importance of all other duties in life and magnify patriotism. 'Free debate' and 'open discussion' has been considered as an integral part of democracy in both Maneka Gandhi Vs Union of India and Rangarajan case. Otherwise democracy has no value and is equivalent to a totalitarian regime. State shouldn't expect 100% of people to behave in an orderly manner. If thats the case then there is no need for any of these laws. We should have the freedom of speech as long as it doesn't impinge the fundamental freedom of others. The more freedom of speech we practices the less oppressed the people in this country will be. For nearly a century, the student movement in India has had the impeccable record of upholding the unity and integrity of our country and raising protests against any expression of anti-national terrorist activities. The youth of these premier institutions are the voice of tomorrow and the innovators of a better India. We shouldn’t stop them. Let them speak. Their Free debate and discussion are the building blocks of our nation. So we, Prathidhwani are extending Heartfelt solidarity with the students and faculty of JNU in their efforts to resist threats against our liberty.