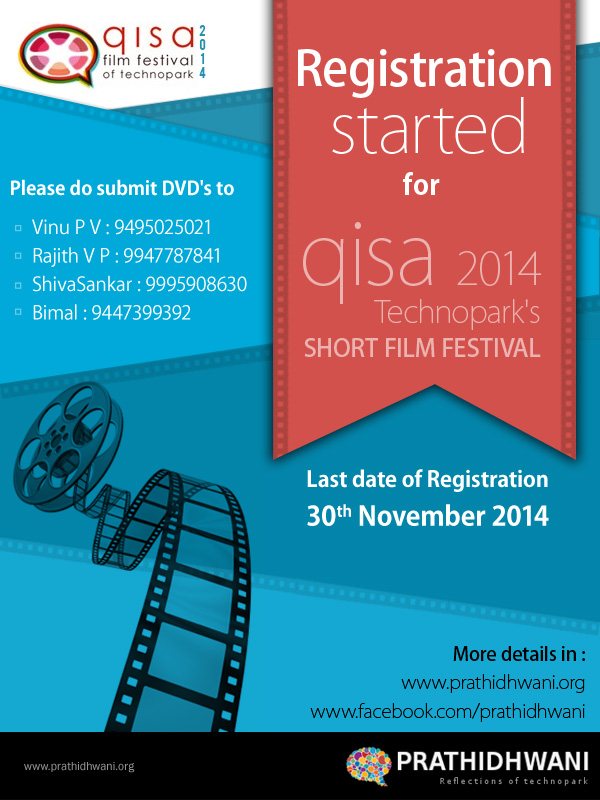 1. The QISA 2014 Technopark Film Festival is a short film festival conducted by Prathidhwani, the Socio Cultural organization of Technopark employees. The competition will be held in December 2014 at Technopark, Trivandrum.
2. The competition is open to all participants from Technopark.
3. The Director and Script writer of the film should be an employee working in Technopark.[Exceptions can be granted to employees of IT companies working in Thiruvanathapuram district, upon committee’s approval]
4. Only Films produced after 1st January  2012 are eligible. Note : Films already screened in Qisa 2012 and Qisa 2013 are not eligible.
5. All films must be submitted on DVD for consideration of the selection committee, before 30th November 2014 . (Data DVD with 720p resolution is preferred)
6. Each entry must be accompanied by a duly filled in entry form and 2 Passport size photographs of the Director and Script Writer.
7. The selection of the Films for the Qisa 2014 TFF will be announced not later than 1st December 2014.

8. The festival committee reserves the right to accept or refuse any film without assigning any reason whatsoever.
9. The Qisa 2014 TFF reserves the right to use excerpts and pictures from the film for promotion and public relation purposes.
10. The film can be in any language, but it should be subtitled in English. If the language of the film is English or Malayalam it is not required to be subtitled.
11. Running time of the film should not be less than 2 minutes and should not exceed 45 minutes.
12. No refund of travel expenses is provided for the participants attending the festival.
13. The films of any Genre can be submitted for the competition.
14. The short film can be documentary, experimental, narrative, fiction, docu-fiction or animation. The original film may be produced on 35 mm, 16mm, HD, DIGI BETA, BETA SP, U-MATIC, DV, DVD; but the film must be available on DVD for presentation or preview purpose.
15. Each participant can send as many entries as he/she likes, but with separate entry forms preview DVD, synopsis/description, still photographs, press kit should be enclosed.
16. The following cash prizes with memento will be as
Best Short Film – Rs. 11111/-
Second Best Film – Rs. 5555/-
Best Director – Rs. 5555/-
Best Script – Rs. 5555/-
17. Registration fees for each film is Rs. 750/- only.
18. Registration fee will not be refunded even if the film is not selected for the competition.
19. The DVD along with the Registration Fee can be submitted to Prathidhwani representatives Directly. Prathidhwani representatives contact phone numbers:

20. Participation in the festival implies acceptance of these Regulations.
21. Decisions of the festival authorities regarding all matters not expressly provided for in these regulations or which require interpretation of the clauses mentioned above shall be final and binding to all parties. Click here to download Registration Form