Qisa 2014, Technopark’s short film festival - Last date of registration is on 30th of November 2014   Techies often look forward to show case their artistic skills in short films. Qisa, naturally  becomes a platform for excellence in the same. Qisa series of short film festival in  this calendar year is announced, with Qisa-2014. This is 3rd in Qisa series, After resounding success of Qisa-2012 and 2013. Prathidhwani- socio cultural organization of technopark employees, has invited entries for Qisa-2014 to be held on December 6th.   Short Film should be an original creation of a technopark employee of any phase. Running time of the film should be more than 2 minutes and should be less than 45 minutes . The Director and Script writer of the film should be an employee working in Technopark and  Only Films produced after 1st January  2012 are eligible( excluding  Films already screened in Qisa 2012 and Qisa 2013).   All films should be submitted on DVD for consideration of the selection committee, before 30th November 2014. Prizes for film will be as following .Films will be Best Short Film – Rs. 11111/-, Second Best Film – Rs. 5555/-,Best Director – Rs. 5555/-,Best Script – Rs. 5555/-   First series of qisa ie Qisa 2012 saw 21 shortfilms, while Qisa 2013 saw 27 short films. Qisa will be conducted as two sessions, one as screening of films and other an award function. Last year award function saw, young film personality  Shri “Vineeth Srinivasan” as chief guest and On the first edition of film festival eminent director shri ” Shaji N Karun” was the chief guest.   Shri M F Thomas, award winning film critic and author of many books on films will be chair of jury. Bhawani cheerath, acclaimed film critic and Sajin Babu, noted young director will be part of the jury. For more details on film festival, please refer to http://www.prathidhwani.org     Screening will be held in Travancore hall, park centre on December 6th Saturday, prathidhwani invites all employees of technopark to utilize this opportunity for  creative expression 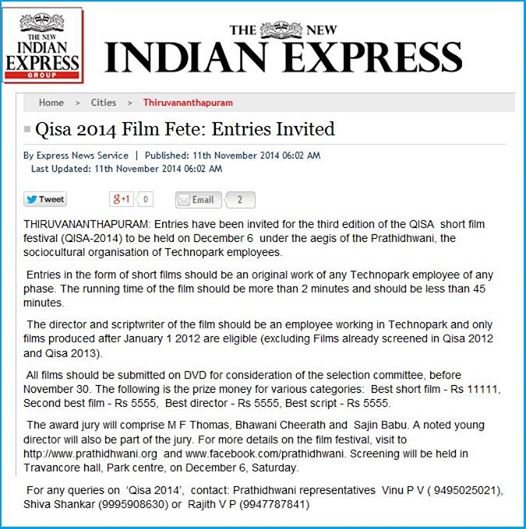 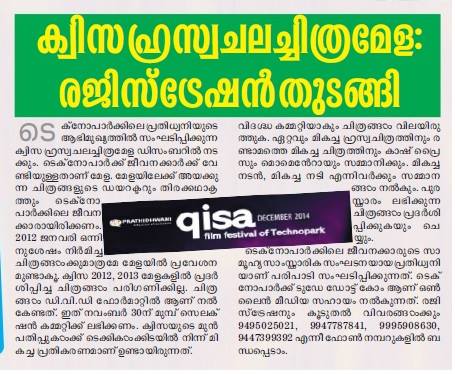